For those of you keeping record, its been 13 years since Calvin Klein has released a new fragrance. The latest of drastic changes Chief Creative Director, Raf Simons has been making throughout the brand (changing Calvin Klein Collection to Calvin Klein 205W39NYC & rebranding CALVIN KLEIN JEANS) is the label’s first fragrance in over a decade exclusive for women. For many, including myself, the brand’s fragrances like ck One & Eternity have been staples since the 90s and this latest addition is a welcomed one!

WOMEN denotes not one, but many – a group of individuals, each with their own distinct voice, their own unique self. CALVIN KLEIN draws inspiration from the multifaceted identity of femininity today – from the empowered reality of modern women and their myriad interpretations. A woman curates herself, and draws from many, to transform. CALVIN KLEIN WOMEN is inspired by this inherent diversity; by plurality combined with individuality; by freedom, by the notion of resisting definition and living by no one else’s rules but your own. By the collective individuality that unites all women. 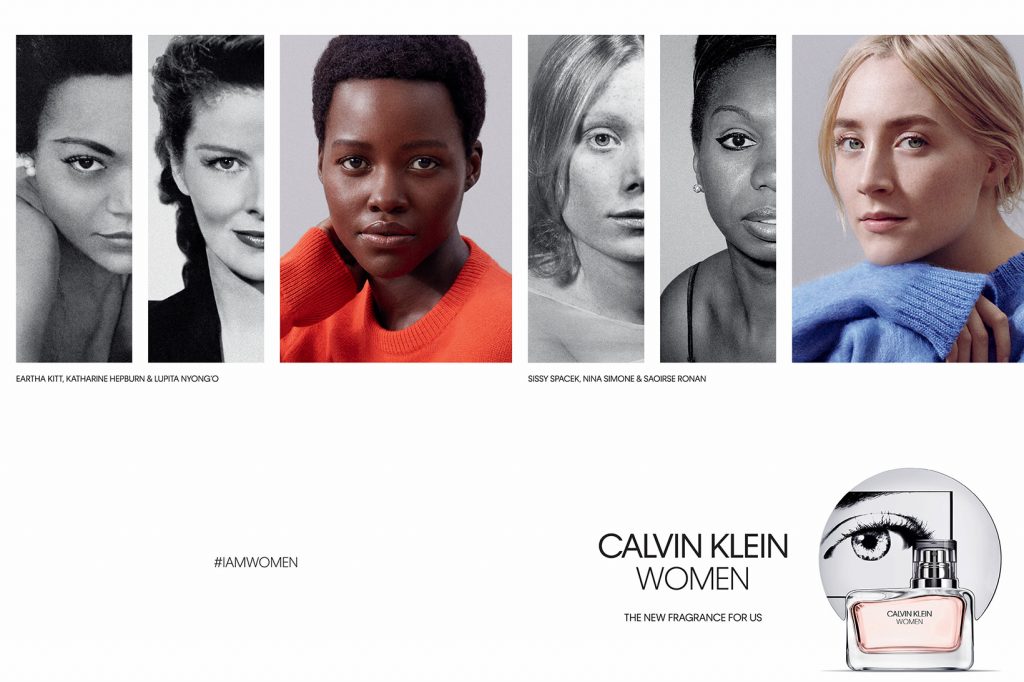 “It takes more than one person to make an individual.” – Lupita Nyong’o

Developed with an all-female cast, the CALVIN KLEIN WOMEN campaign champions iconic women of past generations and celebrates heroines of contemporary culture. #IAMWOMEN.

“You can be any type of woman you want to be.” – Saoirse Ronan

The fragrance’s ad campaign created in partnership by Lloyd & Co. and artist Anne Collier, whose distinct and immediately recognizable photographic artwork also features on both the packaging and the radical flacon design, stars two women helping to shape a profound new Hollywood landscape: Lupita Nyong’o & Saoirse Ronan. Both Nyong’o and Ronan feature in the CALVIN KLEIN WOMEN campaign in a pair of striking and direct portraits by Collier, simultaneously challenging and inviting the observer into the CALVIN KLEIN universe. In turn, these inspiring women have chosen figures from the past who have inspired them – icons of femininity that have shaped their identities, as creatives, and as women.

CALVIN KLEIN WOMEN is available for purchase at Shoppers Drug Mart, Hudson’s Bay Company and Jean Coutu as of August 15, 2018.