Hello nurse! David Beckham returns in all his glory for this latest bodywear collection for H&M. This time in an action-packed video campaign that is set to launch during the 48th Super bowl on February 2nd. Photographed and filmed by Nicolas Winding Refn.

David is on a rooftop, in nothing but his underwear, locked out of a photo shoot. He has no way down and has to go to great lengths to get to safety. David has filmed two alternative versions, in which he performs all his own stunts, and starting January 27th viewers will be able to vote for their favourite on hm.com. The winning version will be featured on Super Bowl.

“It was so exciting to work on my new campaign for H&M with one of my favorite directors, Nicolas Winding Refn. Nicolas pushed me hard to create an action-packed film, which shows off this season’s new heritage-inspired bodywear at its best,” says David Beckham.

“I loved working with David on this project. He is a natural in front of the camera, and was fearless when performing his own stunts. The campaign is funny, smart and spectacular, and shows the many different sides of David’s personality,” says Nicolas Winding Refn.

Check out the behind the scenes video for the campaign below. 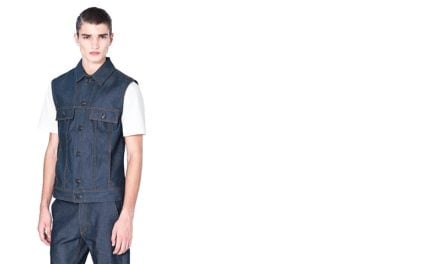